How can I book a tee time?

Can I modify or cancel a booking?

Why should I book with golfscape?

How can I get more help?

Iconic shots of Tiger Woods hitting drives off the helipad of the world's tallest hotel, the Burj Al Arab, ushered in a new era for Dubai as one of the most admired and desired destinations in the golf world. Some called the Woods shot in 2004 miraculous, but the true miracle occurred 15 years earlier in 1989 when the Emirates Golf Club rose out of the middle of the desert for members and visitors to golf in Dubai on a grass course for the very first time.

The desert miracle known as Dubai golf was born, and the European Tour arrived shortly after with the Dubai Desert Classic, attracting the world’s best golfers to the Majlis Course.

Developers continued to build, and people flocked to the region. With its warm winter climate, what set golf courses in Dubai apart back then was the conditioning and playing surfaces. This remains the Emirates’ unique selling point still today. In recent years, new Dubai golf courses with signature names like Montgomerie, Norman, Faldo, Woods, and Els have emerged. They meander through master planned housing developments or find themselves amongst a towering cityscape built around green terrace spaces. 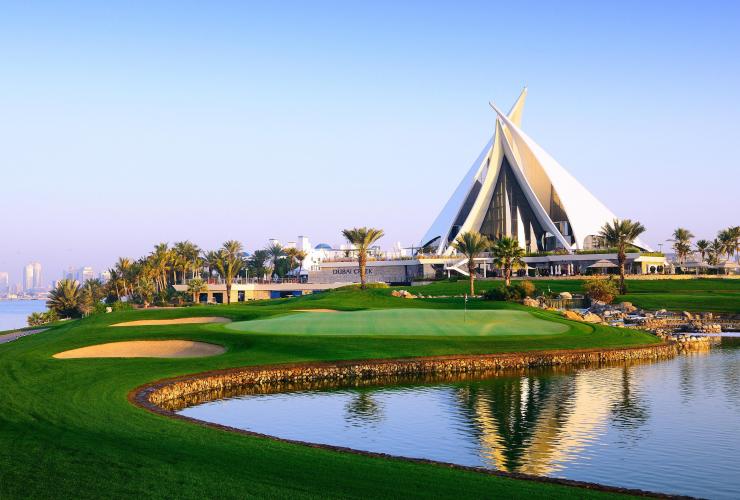 Luxuries and Amenities
With all of the courses located within close proximity of the main hotel and business districts, you’re never more than 25 minutes from facilities providing industry leading service standards and touches of warm Arabian hospitality. Make sure you arrive early at golf courses in Dubai to enjoy the overall experience and utilize the premium locker room amenities and practice facilities, so you hit the first tee with your ‘A’ game. When you golf in Dubai, you will meet and interact with helpful staff at each of our facilities. Caddies are available at some facilities as an option and golf buggies are generally a standard inclusion in your experience. Make sure you hydrate, bring sunscreen, and make plenty of stops at the refreshment stands for a healthy snack to stay energized. Golf rounds generally run four and a half to five hours given the lengthy travel times between greens, so patience will be a virtue!

Book with golfscape Today
As it stands, there are 11 Dubai golf courses, each offering unique features and easy access. Dubai Creek Golf & Yacht Club and Jumeirah Golf Estates are often the highest ranked in terms of customer reviews. You can also choose among a collection of floodlit facilities that serve guests after a work day or when soaring summer temperatures make the evenings more comfortable to tee up. You can also choose from short academy courses, 9 hole layouts, or full 18 hole championship course experiences to fit your budget or busy schedule. Book online!